Analysis of the ShadowHammer backdoor

On March 25, Kim Zetter published an astonishing story describing a supply-chain attack against ASUS which was run between June and November 2018. The ASUS Live Update software was backdoored in order to attack a very specific group of targets. The campaign, named ShadowHammer, was discovered and investigated by Kaspersky Lab, which will present the full details during SAS2019.

NOTE: as of yet Kaspersky has only published a single sample of the backdoor (hash: aa15eb28292321b586c27d8401703494), so the analysis and the considerations presented in this post are specific to that. Once more samples come out it may become necessary to perform some adjustments.

The ASUS software is distributed as a zip archive containing 3 files, setup.exe and two versions of 409.msi. The backdoor resides in the first one. The malicious code is executed just before the program exits. 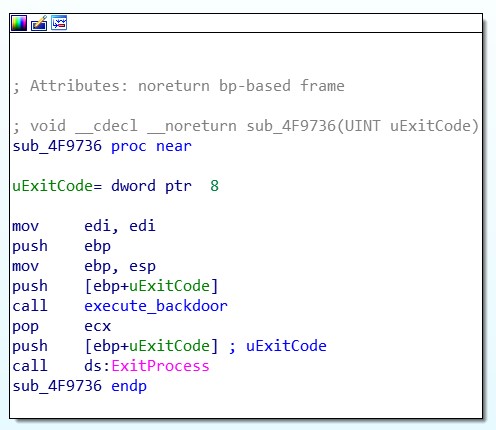 The call to execute_backdoor overwrites a call to a legitimate function just before the execution of ExitProcess.

execute_backdoor is straightforward. First, it allocates a region of memory with read, write and execution permissions. It then retrieves the encrypted shellcode data using hardcoded offsets and decrypts it in the allocated memory. Finally, it calls the entrypoint of the shellcode, once again with a hardcoded offset. 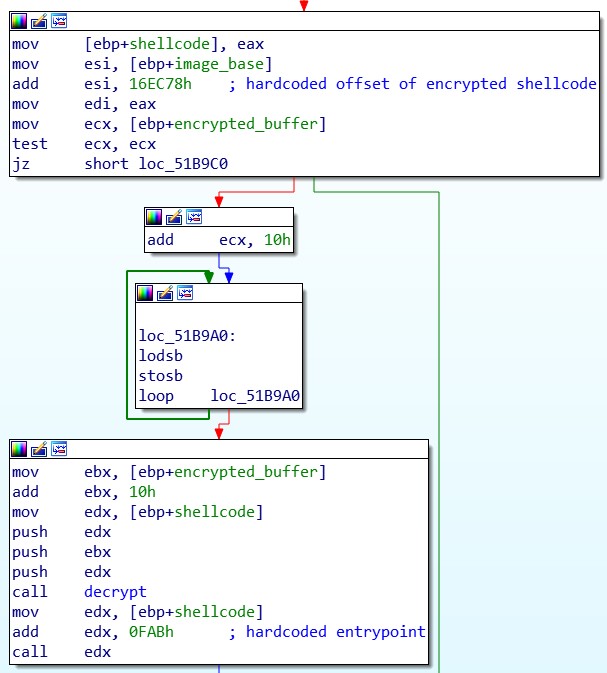 It is worth noting that the two functions used to execute the malicious shellcode, execute_backdoor and decrypt, are both located at the end of the .text section of the executable. This indicates that they were added directly to the legitimate compiled file, rather than during compilation.

The shellcode starts by dynamically loading the DLLs it needs and then retrieves the addresses of the required exported functions. The most interesting ones are iphlpapi.dll, used to retrieve the MAC addresses of the machine, and wininet.dll, for the communication with the C&C.

The next step is to get the MAC addresses of all the interfaces. To obtain this information, the shellcode uses the API function GetAdaptersAddresses. To avoid revealing the targeted addresses, the authors of the backdoor stored their MD5 hashes. In order to correctly check the correspondence, for each interface of the machine, the shellcode computes the MD5 hash of the MAC address. 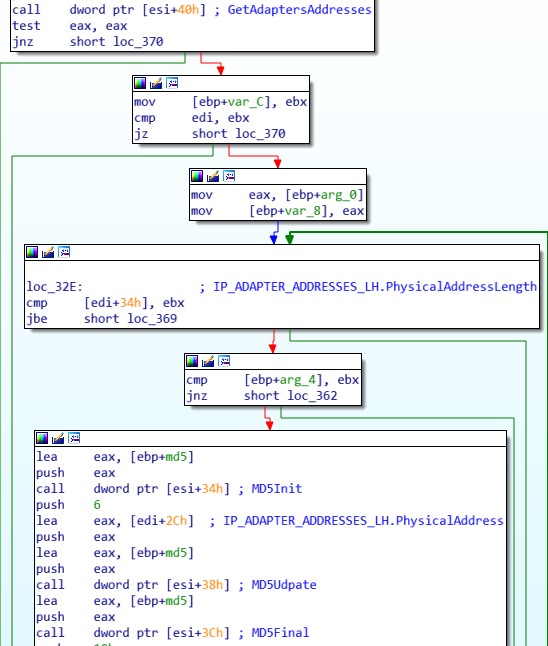 We can now look at how the backdoor checks if the retrieved MAC addresses match any of the targeted ones. The data of each target is stored in the following data structure:

sep1 and sep2 are always 0. type can be either 1 or 2. If type is 1, in order to match this target the machine just needs to have a MAC address with an MD5 equal to md5_hash1; md5_hash2 is filled with 0. Instead, if type is 2, both md5_hash1 and md5_hash2 have an actual value and they both must be found in the MAC addresses of the machine.
In the example below, we can see type in red, md5_hash1 in blue and md5_hash2 in green.

As mentioned by Vitaly Kamluk from Kaspersky Lab, the complete list of targets is scattered among different samples of the backdoor. This specific sample contains 18 of them.

If the MAC addresses match one of those in the target list, the shellcode contacts the C&C with the following URL

followed by the hex encode of the matched md5_hash1.

Using the WININET APIs, the shellcode of the second stage is downloaded and saved in another memory region with read, write, execute permission. Finally it is executed.

If instead the current machine is not a target, the shellcode performs one final action. It creates a file named idx.ini in the folder of the current user, where it stores a date a week after the current one. The purpose of this file is unclear. 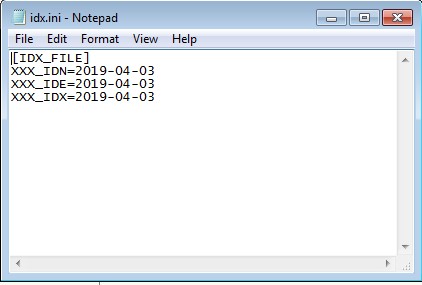 At least for this sample, the backdoor does not perform any malicious activity on machines that are not targeted. There is no form of persistence, so the people behind ShadowHammer cannot reobtain execution unless the setup.exe file is run again by a user.