Flare-On is one of the most challenging CTFs of the year when it comes to reverse engineering. In this post I will present an approach to solve level 9 based on hooking program functions with the aid of my library APIhooklib. This will not be a complete solution, the focus will be on the decryption of the VB script, which I consider the hardest part to tackle in this challenge. For a full walkthrough I recommend the one posted by the Flare team itself (link).

First, a quick summary of the challenge. The program writes an encrypted shellcode in a dynamically allocated memory region, which is then set to PAGE_NO_ACCESS permission. The same is done for an encrypted VB script. A vectored exception handler is registered before calling the encrypted shellcode. Since the memory region of the shellcode has no access permissions, an exception is triggered, causing the exception handler to execute. The handler decrypts the current instruction and resumes the normal execution. The instruction is executed, after that a EXCEPTION_SINGLE_STEP exception is thrown. Once again the exception handler kicks in, this time re-encrypting the instruction. This mechanism makes sure that only one instruction is “in clear” at any given time. The shellcode performs the following actions: set up a COM class, create three objects of that class (later used by the VB script), run the VB script. When the system library tries to parse the encrypted VB script in the PAGE_NO_ACCESS region, the same mechanism as before decrypts it on the fly.

The big difference between the shellcode and the VB script is in the encryption: the shellcode is encrypted with a single-byte XOR (0xFE), which is pretty simple to identify either by reversing the encryption routine or with a bit of bruteforcing; the script, on the other hand, is encrypted with a combination of ciphers, making the static approach a real pain. Even with dynamic analysis things do not look pretty, because running the program inside a debugger becomes a constant fight against the continuous exceptions.

The solution presented by the Flare team leverages the possibility of disabling specific exceptions in WinDbg. Since I was oblivious to this feature, I came up with a solution that revolves around setting hooks on the encryption/decryption routine.

To better understand my approach we need to take a closer look at the heart of the problem, the exception handler. Its structure is almost symmetrical: one half handles EXCEPTION_ACCESS_VIOLATION, for the decryption; the other handles EXCEPTION_SINGLE_STEP, for re-encryption. 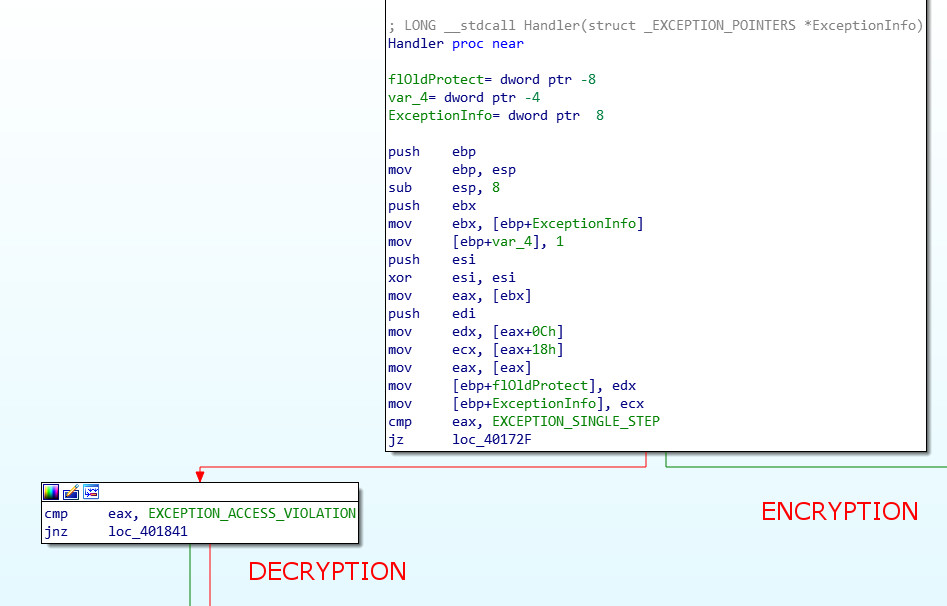 There is a single routine for decryption and encryption of both the shellcode and the VB script. It accepts four parameters: 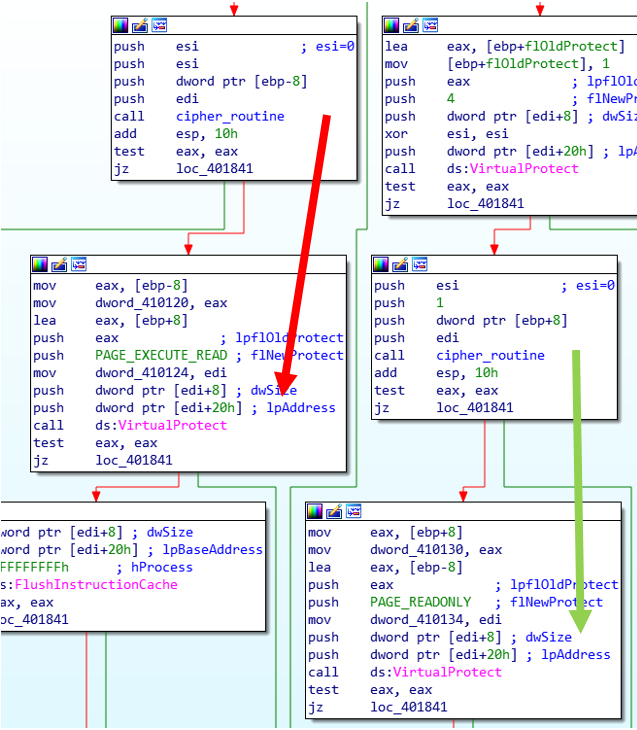 The image shows the section of the exception handler that performs the decryption and adjusts the protection of the memory region. In both cases the 4th parameter is 0 (meaning decryption). The call that has the 3rd paramater set to 0 (red arrow), is followed by a PAGE_EXECUTE_READ, so we expect it to be for the shellcode. On the other hand, the call with the 3rd parameter set to 1 (green arrow) is followed by a PAGE_READONLY, which is enough for the parsing of the VB script. Keep in mind this information as it will be used in our hooks.

A couple of words to describe APIhooklib. It is a static library that contains routines to set hooks on any function of the local process, either by address or by name (API functions). Hooks can be set before and/or after the execution of the target function. Moreover, the return value can be overridden and the execution of the function itself can be inhibited. The main use case is inside a DLL which is loaded by/injected into the target process. For more technical details, here is the blogpost about APIhooklib. Note that it refers to a previous version of the library, but the core mechanisms remain the same.

The goal is to “intercept” the bytes of the script between decryption and re-encryption. This can be achieved by either setting a hook after cipher_routine is executed for decryption or before it is executed for encryption. Here we have an example of the former. To have an idea of how many bytes are accessed in each iteration, we log the target address:

(The hook routine has the same prototype of the hooked function, plus an additional parameter for the return value)

With the exception of the first, each cycle accesses two bytes. In hindsight this makes sense, since the script is encoded in UTF-16, which means that each character is stored in two bytes.
Note: there are also some reads at odd addresses. I cannot explain them, but we can just filter them out.

At this point we add also the two bytes to the log.

Finally we feed log.txt to a Python script to build the VB script:

And get our desired result. 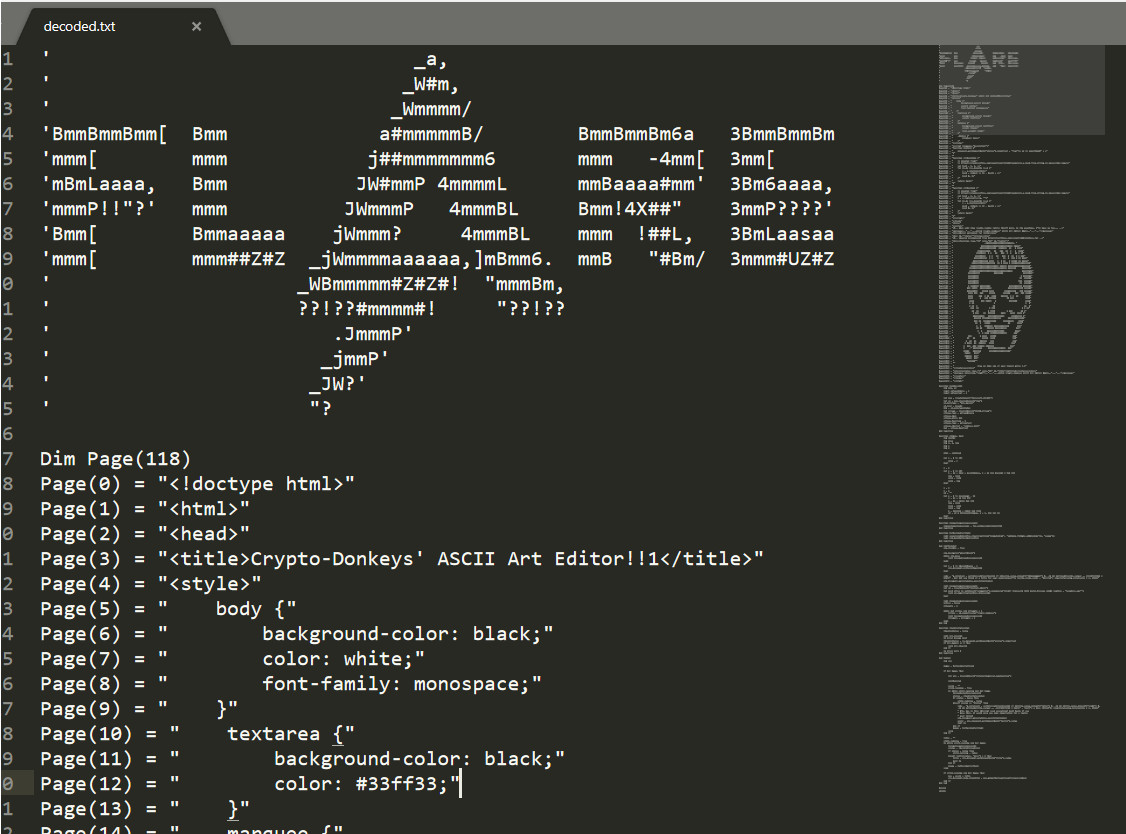 I will leave here a link to the DLL project: https://github.com/mauronz/CTF_stuff/tree/master/2018_flareon/9/injector

It is pretty straight forward to use:

inject creates a new suspended process with the given executable and arguments, then it loads the DLL in it via thread injection and finally resumes the process execution. The required hooks are set in DllMain.

This was a very simple example of practical usage of APIhooklib. If you, like myself, like playing with code instrumentation and you are looking for a lightweight alternative to PIN, consider trying it. Just use the DLL project as a base template for whatever tool you want to build. For any question, suggestion, contact me on Twitter. Also, if by any chance you are reading this but haven’t tried the Flare-On challenge, please go for it. It is an awesome mental gym and a source of valuable study material.